Miro will be eleven 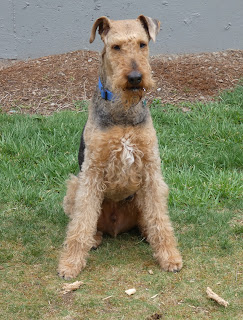 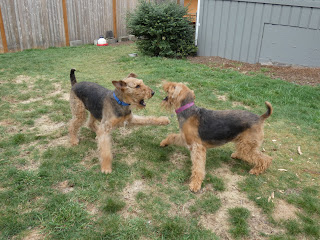 Miró was one of the Airecraft Dirty Dozen, born January 26, 2009. I brought him home to Washington from Ohio on my birthday at the end of March, giving him the registered name of Airecraft Carries Me Home. Named also for the Spanish artist Joan Miró, he worked for several years as a sculptor and installation artist. Some of his arrangements from years back can be found on my blog, sherryrind.blogspot.com. During obedience classes, he figured out that he could stop the action and make people laugh by flopping onto his back and waving his forefeet in the air. Now that he suffers from arthritis, he does it only rarely. He does continue to give himself a full body massage by ramming head first between people’s legs. Lanky and somewhat tall, he’s fortunately not tall enough to cause damage in most cases.

He was a hellion in his youth, the boy on the playground who didn’t know his own strength and knocked all the other kids over like bowling pins and went on his merry way, oblivious. He has a tendency to aim pee on the back of his front foot. To work off excitement, especially when visitors arrive, he humps his bed. Laughter spurs him on. He is nearing the end of his life, and I don’t know how I’ll bear the loss even though I’ve borne many. Every day I tell him some variation of my gratitude, which extends to Dale and Kim Burrier for breeding the dog that did indeed carry me home. 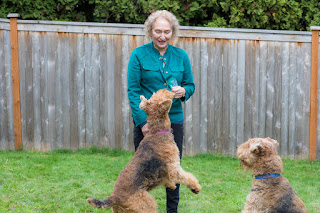